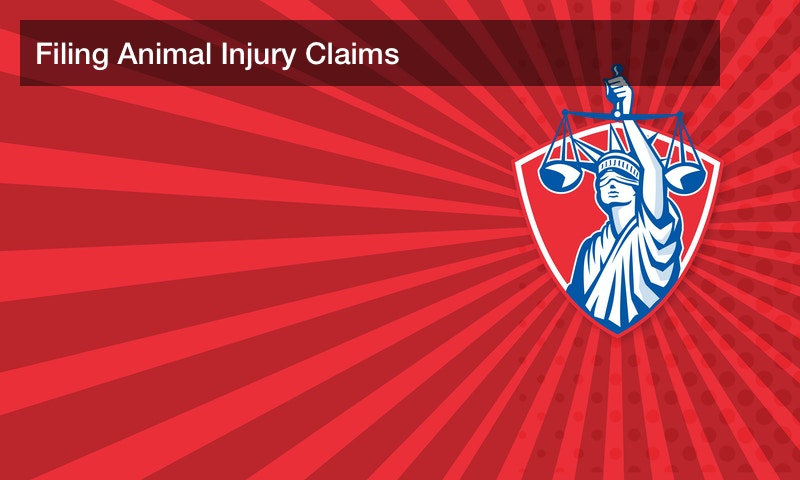 Millions of people experience animal bites each year. As a matter of fact, there are about 4.5 million dog bites alone in the US each year. Many people do not realize that they have rights under animal injury claims law.

Animal injury claims are filed each year by victims of dog attacks. These claims help victims find the justice that they are seeking. If you have been injured by an animal attack you need to learn about your rights.

The Most Frequent Animal Attacks

It stands to reason that you are at least somewhat familiar with the dog you are far likely to trust the dog more than if you do not know the dog at all. For example, your neighbor has a dog that is normally behind aluminum fencing. The dog rarely acts aggressively toward you, one day you see the dog outside the fence, and startle the dog by going to grab its collar. You may get bit even if you know the dog.

On the other hand you see a stray hovering around the dumpsters at work, you use caution when you see it and do not make sudden movements. You likely will be able to walk away unscathed. Familiarity can mean you let your guard down and take steps you would not take with a strange animal.

Of course, there is always the wayward wild animal that can attack as well, but it is far less likely. For example, a mother Racoon gets somewhere in your house, you go to shoo it away, and it will attack because she is protecting her babies. Normally wildlife will run in the opposite direction unless they have young or you corner them. Of course, there are simple solutions to fears about wildlife attacks. Call in a raccoon removal company to get rid of the raccoons safely, never approach a wild animal, and never corner them and force them to take the offensive.

Domesticated animals are a different story if you have to live in close proximity, like that neighbor with the dog behind the fence, but there are ways you can protect yourself. Very rarely does a dog go out of their way to attack someone without some sort of provocation, but that does not mean it does not happen. A simple rule of thumb is to always remember dogs have teeth therefore they can bite.

How Can You Protect Yourself From an Animal Attack?

Because dog bites are the most prevalent, we are going to focus on how to avoid getting bit by a dog. There are a few things you should always keep in mind when it comes to dogs:

If your neighbor has a dog behind a fence, never hang your arms over the fence to pet the dog, go through the fence or wait till you see the dog outside the fence to give it attention. Always approach a dog slowly and avoid making any jerky motions which can be misconstrued as a threat by the animal. Take your cues from the dog’s body language. Some dogs, prefer if you ignore them while they check you out.

A little self defense to protect yourself can go a long way. Yes, most people love dogs, but you do have to use caution when approaching a dog whether you know the dog or not.

If you do your part you may be able to avoid having to file one of the millions of animal injury claims that are filed each year. Remember pup parents are often just as shocked as the victim when their dog bites someone.

Every state has laws that govern animal injury claims. A lawyer that specializes in dog bites is your best source for information about the laws in your state.

The first thing to do, of course, is to make sure you get the medical help that you need. There is a myth that dog’s mouths are cleaner than humans, the fact is a dog’s mouth has millions of germs and a dog bite can easily get infected.

Hopefully the owner of the dog has gotten regular domestic animal medical care and the dog’s shots are in order, and they are willing to supply you with the information. If not, part of your medical care may include treatment for rabies.

An animal attack injury attorney can help you navigate the animal injury claims process, and it can be a daunting process. A lot of the success of the case will depend on whether you were bit by a dog that someone claims, the location where you were bitten (geographical), and what led up to the attack.

Your injury lawyer will ask you about:

Your lawyer will need to ask these questions so that they can prepare your animal injury claims and file them with the owner of the dog, their lawyer (if they have one), and the homeowner’s insurance company.

One of the most important parts of the animal injury claims process is being able to establish liability. Establishing liability means ensuring that the person who owns the dog takes responsibility for the damage the dog has caused.

Many owners will do whatever it takes to not take the blame for their irresponsible behavior. For example, let’s say that you answer an ad for someone that needs a dog walker. The owner fails to tell you that the reason they need to hire a dog walker is that their dog is no longer welcome at the local pet boarding service for showing aggressive behavior to other animals. As you are on your daily walk, another dog runs by. The dog that has aggression towards other animals gets into a fight with the other dog and you get bit.

The owner may argue that you got bit because you got involved in a dog fight, but the fact is the owner was negligent in not sharing information about the dog’s tendencies to go after other animals. A good lawyer knows the laws and knows how to present animal injury claims to establish an airtight case for liability.

What If I May Have Been At Fault?

A lot of people that are bit by animals feel like they have to share some of the responsibility. Of course, there are times when someone is bitten when it is their fault, but in most cases, it is not. For example, if you break into someone’s home or the gun store with nefarious intent, and there is a dog there to protect the property, you do not have a leg to stand on. On the other hand, if you were invited to a cookout at a friends house and walked into the backyard as instructed and their 80 pound German Shephard bit you, that is not your fault.

Even if you feel like you may have been a party to the situation, you should talk to an injury lawyer that specializes in animal injury claims. You do have rights as a victim.

Animal Injury Claims And Other Animals

There are not only laws that allow human victims to have some recourse if they are bitten by an animal but there are laws that protect your animals as well. Let’s say your dog is in a fenced-in area and a dog jumps the fence or digs under the fence and attacks your dog. Let’s say the trespasser is your neighbor’s dog. You take your dog to the vet and are handed a hefty bill for the injuries that they sustained. Your neighbor is responsible for that bill, you may have a case.

Let’s say you and Fido enjoy the freedom of the dog park. While visiting the dog park one day another dog attacks your dog. Again the owner is responsible for that dog’s behavior. A good lawyer can help to ensure that you are able to have the vet bills covered.

As a dog owner you are expected to take reasonable steps to ensure that your dog does not bite anyone or become a nuisance to others. This is true of every dog owner. One of the things the courts consider when they are evaluating animal injury claims is if the owner took “reasonable steps” to protect people and other animals from their dog.

Some states lay out very clear rules for securing dogs, especially some breeds of dogs. Some cities have actually prohibited certain breeds of dogs from living in the city boundaries to better protect the public. At minimal most urban areas have “leash laws” which means your dog has to be on a leash whenever they are being walked except in designated areas.

Someone once said “there is no such thing as a bad dog, there are just bad owners” and there is some truth to that. Animal attacks are extremely traumatic events that can both physically and mentally scar the victim for years to come. Irresponsible dog owners typically continue to be irresponsible dog owners. Animal injury claims not only give victims recourse they can help to protect other people from having to go through the same thing.

Negligent owners should be held responsible for the damage that their dog causes and they should not be permitted to ignore the problem. Animal injury claims can push owners to get their dog under control and take responsibility for their actions.

If You Or a Loved One Have Been Attacked

Animal attacks are something no one should have to deal with. Animal injury claims can help people to think twice before they ignore bad behavior in their animal. Luckily you do have options if you or a loved one have been injured by an animal.

If you or your love done have been bitten or attacked by an animal there are laws that can help you to:

You do not have to navigate the process on your own. Insurance adjusters love when a victim decides not to hire an attorney because they can easily take advantage of the victim. A dog bite injury lawyer can help you to get the justice that you deserve and ultimately ensure that the owner of the dog never lets it happen again to anyone else.